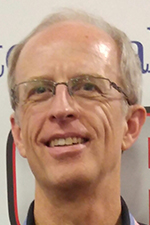 By Ray Cornell
In general, playing racquetball without a referee occurs much more often than not. Virtually all recreational play is “self-reffed” and some tournament formats are designed to be self-officiated. In other cases, court design doesn’t allow the viewing access needed for a referee to call a match. So, although it’s been covered in the Rollout before, it seems worthwhile to dust off the topic and re-visit some key aspects. Italicized emphasis is on text taken directly from the USAR rules.

The Official Rules & Regulations of Racquetball, Section D is titled Self-Officiating, or “How to Ref ‘Without’ a Ref.” While most people may think of the referee as someone to keep score and enforce rules, maintaining a safe environment is also an important part of the role.

In fact, the section opens by stressing safety, with “Safety Is the Responsibility Of Every Player Who Enters The Court!” … and “At no time should the physical safety of the participants be compromised. Players are entitled, and expected, to hold up their swing, without penalty, any time they believe there might be a risk of physical contact.”

Score: It is important for the server to announce the score, … and for the sides to agree on both the server’s and receiver’s score before each first serve. The server should do this before serving, not as the service motion begins.

Serve: The receiver has the primary responsibility to make the call … of short, long, three walls, etc. Although either player may make that call, it must be made immediately, without waiting to see how the return of serve plays out. Calling a screen serve is the sole responsibility of the receiver and must be made before attempting a return or losing sight of the ball by starting the wrong way.

Rallies: During rallies, the hitter has the responsibility to make the call … of skip, double-bounce, or illegal hit. If the call is not made, and the opposing player sees an illegal shot, play continues until the rally ends. At that point, appeal to the hitter by describing the shot in question and ask for consideration to change the outcome of the rally. If the hitter is sure of their non-call, and the opponent is equally sure of their own assessment, the rally should be replayed. As a matter of etiquette, players are expected to make calls against themselves any time they are not sure. Unless the hitter is certain the shot was good, a challenged shot should be replayed.

Hinders: A hinder is called only by the person going for the shot, and they must do so immediately and not wait to see how good their resulting shot was. … If the hindered party believes they can make an effective return – in spite of some physical contact or impairment that has occurred – they may continue to play and accept the outcome. They should not claim a hinder after losing a rally.

If a player realizes that they have committed a penalty hinder, then that player “should simply declare their opponent to be the winner of the rally. If the player does not immediately concede the point, when the rally ends the offended player should then suggest that a penalty hinder may have occurred. However, unless the player agrees to the penalty violation, it should not be called, but simply replayed.

When a holdup for safety occurs as described above, it is the responsibility of the offensive player (the hitter) to make the call of hinder, and the players should agree as to whether the hinder is a replay or penalty hinder. If agreement is not reached, then at least replay the rally. A re-reading of the rules may be needed in order to determine if it’s a replay or penalty hinder.

Referee: But wait – isn’t this article about self-refereeing? Yes, but … Should either player, for any reason, desire to have a referee, then a referee should be sought, although there could be some delay in the match while one is sought. This is especially important in tournaments, and all players are entitled to make such a request to the tournament desk or director, to ensure fair play at all times.

In conclusion, help maintain the integrity of the sport by playing ethically and honestly during games that are “self-refereed.” And above all, keep an eye out for each other and be safe on the courts!