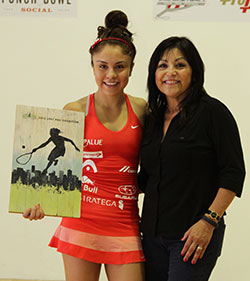 Paola Longoria and Linda Torres-Winters at DAC in 2015

Many CRA players know Linda “Lindita” Torres-Winters as one of the friendlier opponents they’ll face on court, or as a generous donor of “Lindita’s” snacks on the sidelines. Her long-time sponsorship of metro-Denver tournaments sets her apart as one of the most dedicated supporters of Colorado racquetball, and everyone is grateful for her generosity. She’s pictured here with No.1 women’s pro, Paola Longoria at the 2015 Mile-High Pro Am, and we wanted to share a bit more of her interesting path to success.

Just this year, Lindita was honored as the 2015 Keynote Speaker for Vestido Rojo in conjunction with Go Red Por Tu Corazon, the American Heart Association’s program to harness the energy, passion, and power of Hispanic women to band together and wipe out heart disease. She is well-known among Denver’s top businesswomen for her success in creating her manufacturing company to produce Lindita’s Instant Salsa Mixes in 1994 and for launching the Lindita’s Kitchen Cooking Show with Aurora 8 and Lindita’s Kitchen YouTube channel in 2011.

Born the fifth child in a family of nine, Linda’s father was a Spanish immigrant and her mother a North American Indian. Early on, the migrant family had traveled from Texas to the upper Midwest harvesting seasonal crops, until settling in northern Illinois when Linda was twelve. At sixteen Linda had to leave school to work two jobs to help support her family, after her father became disabled in a work-related accident. Just one year later, she earned her high school diploma from the High School Equivalency Program (HEP) and became the first and only person in her family to attend college.

While pursuing major study in Bilingual Education and Fine Arts at the University of Wisconsin-Milwaukee, she continued to work with the High School Equivalency Program, traveling to migrant farm worker camps, recruiting teens to earn their diplomas. After graduation, Linda continued this important work as a consultant to Coca Cola’s Agriculture Division, conducting fundraisers to help build schools, medical and community facilities for migrant workers.

Fast forward to 1997, when Linda Torres-Winters was named Denver’s Hispanic Business Women of the Year, both for her acumen and community service. She has served as a Director on the Board for the Denver Hispanic Chamber of Commerce, Mi Casa Resource Center for Women, The Justice Information Center and NBA Colorado Christian Home Tennyson Center for Children & Families. She also serves on the Boards of the Denver Open Media Foundation and the Denver Latina Chamber, and as a member of the Colorado Food Association and Colorado Proud.

Other recognitions have included being nominated for the 1999 Ernst & Young LLP Entrepreneur of The Year, the 2001 Small Business of The Year, the Adult Leadership honoree for the 1st Hispanic Heritage Awareness Award for the Colorado Rockies and a finalist for The Denver Business Journal’s Outstanding Women in Business in 2003. Even more recently, she was the 2013 Regional Award Winner with Samuel Adams National Pitch Room Brewing the American Dream Competition.

Lindita starred in the independent film “Passing Berthoud”, which played in film festivals around the country as well as The Denver Latino International Film Festival in 1999. She hosted a local television talk show, Hispanos Americanos, and launched Lindita’s Cooking Show with KBDI in 2001 to showcase traditional Mexican dishes, all while writing food columns that are now compiled into a cookbook.

Nationally, Lindita was one on six women invited to be on the Maury Povich Show to donate her long signature hair to Wigs for Kids, for children who have cancer, and was invited to be a guest on the Montel Williams Talk Show that to tell her story and how she turned her many lifelong dreams into reality.

Learn more about Linda’s exciting life and times, online at: